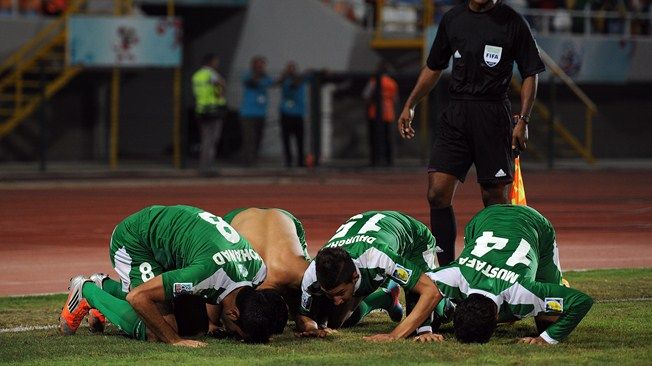 Iraq are through to the quarter-finals of the FIFA U-20 World Cup after Farhan Shakor’s decisive goal saw off ten-man Paraguay in extra time.

Though the scoreline might suggest otherwise, this was one of the most open and entertaining matches of the tournament thus far, with plenty of chances for both sides. That neither team made the breakthrough in a lively first half was due almost entirely to the goalkeeping of Mohammed Hameed and Diego Morel, both of whom were in outstanding form.

Morel was the first to shine, diving low to his right to palm away a ferocious 30-yard drive from the left boot of livewire Iraq No11 Humam Tareq. Not to be outdone, Hameed bettered that with a magnificent reflex stop of his own three minutes later, somehow diverting behind a powerful low 20-yard shot from Arnaldo Sanabria.

The Iraq captain was at it again soon after, diving to the same side to deny Derlis Gonzalez, who had run clean through, and then watched as Jorge Balbuena dragged the follow-up wide. Paraguay were creating the better chances at this stage, but Iraq remained dangerous on the break and with 28 minutes played only an improvised block by the legs of Morel prevented star man Mohanad Abdulraheem heading home from inside the six-yard box.

Abdulraheem has been one of the stars of this FIFA U-20 World Cup and he again went close ten minutes into the second half, volleying just over after Dhurgham Ismael’s left-footed cross had rebounded into his path in the penalty box. Iraq were taking a grip on proceedings at this stage and their cause was boosted yet further with ten minutes remaining when Sanabria received a straight red card for an over-the-ball challenge on Tareq.

However, Paraguay could have won it two minutes from the end of the regulation 90 when Derlis Gonzalez, clean through, delayed too long in taking his shot and allowed Ali Adnan to get across and make a last-ditch saving tackle. Adnan has been something of a hero for Iraq at these finals and he was involved at the other end when Hakeem Shakir’s side took the lead four minutes into the first period of extra time.

His deep cross caught Paraguay captain Junior Alonso napping, and in stole substitute Farhan Shakor to send a header spinning into the net off the inside of the left-hand post. The noisy band of Iraqi fans erupted, which Shakir did a jig of delight, and they can now look forward to a trip to Kayseri in the quarter-finals.