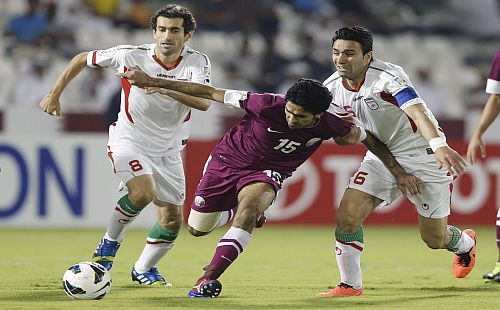 Reza Ghoochannejhad strengthened Iran’s hopes of securing a fourth appearance at the FIFA World Cup finals with the only goal of the game as Carlos Queiroz’s side saw off Qatar at Al Sadd Stadium on Tuesday.

Ghoochannejhad’s 66th minute strike (pictured) earned the Iranians all three points and moves them on to 10 points from six games while Qatar’s chances of reaching Brazil 2014 suffered a blow.
Fahad Thani’s side are three points adrift of the Iranians in fourth place in Group A with just one game remaining while Iran have a game in hand over the Qataris. The top two nations qualify automatically for the finals while the third place side in the group progresses to a playoff.
“We deserved to win today as we played well which helped us to get three important points. We took advantage of our good preparations and the team had a good show in the match today," said Iran assistant coach Antonio Simoes.
“We will not celebrate as we have still two matches remaining. We have achieved an important three points and a good victory and I want to thank the players who followed the tactics and this helped us to get a positive result.”
Sebastian Soria was not available for the home side after picking up a suspension and the Qataris missed the Uruguay-born forward’s presence in attack, despite the enthusiasm and positive running of former AFC Player of the Year Khalfan Ibrahim.
After a tepid opening 30 minutes, Qatar were just inches away from taking the lead when Ibrahim slipped the ball into the path of Hasan Al Haydos, but his shot came back off the woodwork with Rahman Ahmadi beaten.
Qatar monopolised possession but had little to show for their time with the ball and, in the dying minutes of the half, Iran twice went close to taking the lead.
With three minutes left in the period, Masoud Shojaei’s free kick almost caught out Qusam Burhan, only for the goalkeeper to readjust his positioning as the ball swung towards goal to tip the ball to safety.
The resultant corner led to Ghoochannejhad stealing in at the far post to head goalward, only for Burhan to pull off a fine save to deny the Standard Liege forward.
Iran’s ascendancy in the dying minutes of the first half continued into the second half and, by the 66th minute, the three-time Asian champions had taken the lead when Queiroz’s team took advantage of a defensive error.
Ghoochannejhad was on hand to capitalise when the ball ricocheted off Ibrahim Abdulmajed and into the path of the forward, who made no mistake as he slotted the ball calmly beyond Burhan’s reach.
Qatar grew increasingly desperate as time ran out, throwing the ball forward at every opportunity but the Iranian defence held out to secure a third win of the final phase of qualifying and improve the nation’s hopes of a place in Brazil next year.
“The fair result tonight would have been a draw as we did not expect to lose tonight especially as we had many chances which we didn’t take advantage of. Iran were physically strong and they were good in defence,” said Qatar coach Thani.
“We played well but we didn’t take advantage of the chances that we had as we were without the player who could finish those chances.
“We knew that the match would be very hard and we were hoping to get a better result.”