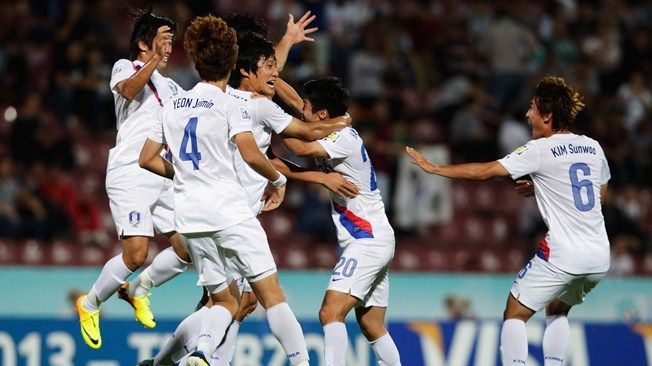 Korea see off Colombia on penalties

Korea Republic triumphed over Colombia 8-7 on penalties following a dramatic encounter in Trabzon, which ended 1-1 after extra-time, seeing the Asian champions go into the FIFA U-20 World Cup quarter-finals.

Korea Republic triumphed over Colombia 8-7 on penalties following a dramatic encounter in Trabzon, which ended 1-1 after extra-time, seeing the Asian champions go into the FIFA U-20 World Cup quarter-finals.

A stunning free-kick from Juan Quintero broke Korean hearts as the Colombian captain cancelled out Song Juhun's opener with the last kick of the game. It went to penalties and it was Deivy Balanta who was the unfortunate player to miss their kick after a nail-biting finale. They will now face Iraq in Kayseri.

Korea upset the pre-match odds by taking the lead after just 16 minutes. When Colombia could not effectively clear Kim Sunwoo's free-kick, Kwon Changhoon headed back into the box for Song to sweep into the corner.

Jhon Cordoba had already spurned one opportunity prior to the goal and Colombia were not in the mood to let Korea off lightly, with Quintero the principle orchestrator. He test Lee Changgeun twice in the following minutes, before Harrison Mojica tried his luck to no avail.

While the South American champions continued to press and probe, a stern Korean defence largely repelled them. Kim Hyun went close to a spectacular second after the break too, controlling Kang Sangwoo's cross on his chest, before hooking over his head just beyond the far post.

All that was good from Colombia came from the feet of Quintero - who has been superb throughout Turkey 2013 - and he set up another great chance through with some superb vision. The captain chipped through to Luis Mena, but despite finding Cordoba in space, the striker wildly fired over.

Jherson Verghara forced Lee to punch after his shot from range, while sublime skill from Quintero kept hopes alive. Deivy Balanta went the closet yet, when his effort from the right side of the area struck the inside of the post on 90 minutes, and it looked like it just was not Colombia's night.

As the clock ticked down Lee saved superbly from Quintero as Korea hung on to keep Colombia at bay, but the Pescara maestro was to have the last laugh. With stoppage time all but up, he stood over a free-kick to the right of goal and with his trusty left foot he scored a stunning equaliser to send the match into extra-time with the final effort of normal time.

Tired legs took hold of both teams in the additional 30 minutes, who had given so much in the first 90 minutes in both attack and defence. Colombia came close to finishing the job in normal play when Verghara charged forward and exchanged passes with Cordoba, only to shoot straight at Lee.

Penalties it was to decide the sides' fate. Song, Korea's hero from early on, fired over, but Felipe Aguilar's effort was saved by Lee as it finished 4-4 before going into sudden death.