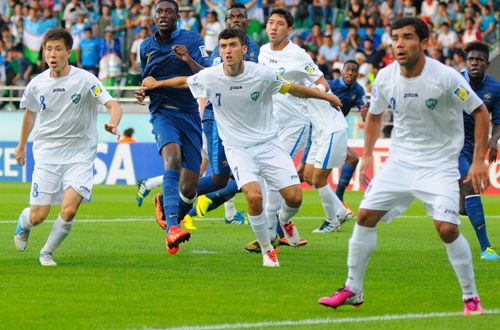 Uzbeks no match for in-form France

France have cruised into the semi-finals of the FIFA U-20 World Cup with an emphatic 4-0 victory over Uzbekistan in Rize’s Yeni Sehir Stadium.
Les Bleuets were in irresistable form in this one-sided encounter and secured their biggest win of the tournament thus far thanks to goals from Yaya Sanogo, Paul Pogba, Florian Thauvin and Kurt Zouma.

Uzbekistan, who lost Tohirjon Shamshitdinov to a red card midway through the second half, were outclassed from the word go, with Sanogo striking the post with a low shot after just two minutes. Thauvin himself struck the upright soon after and several more chances came and went before France broke the deadlock just after the half-hour mark.

Terrific play on the left between Lucas Digne and Jean-Christophe Bahebeck ended with the latter picking out a superb low cross that left Sanogo with the easiest of tap-ins from two yards. Bahebeck was outstanding throughout and he was again involved four minutes later when France doubled their lead, winning the penalty from which Pogba coolly sent the keeper the wrong way.

Les Bleuets were rampant now, and there was to be another goal – and another penalty – before the Uzbeks could retreat to the dressing rooms at half-time. This time, a handball by Diyorjon Turapov was penalised and, though Asilbek Amanov got a hand to Thauvin’s left-footed kick, he couldn’t keep it out.

This story of French dominance continued after the break, with Sanogo missing a glorious chance four minutes after the restart and Thauvin surging through soon after to force a fine save from Amanov. However, Uzbekistan were merely delaying the inevitable and goal number four duly arrived on 64 minutes, when Kurt Zouma dived in at a corner to send a perfect glancing header flashing just inside the far post.

Salt was applied to the central Asians’ wounds five minutes later when Shamshitdinov was sent off for a second bookable offence, though they will go home with heads held high, having reached this advanced stage of the tournament.

France, meanwhile, can now look forward to a last-four duel with either Chile or Ghana, who play tomorrow in Istanbul.