Scare for Spain as hosts bow out Янгиликлар 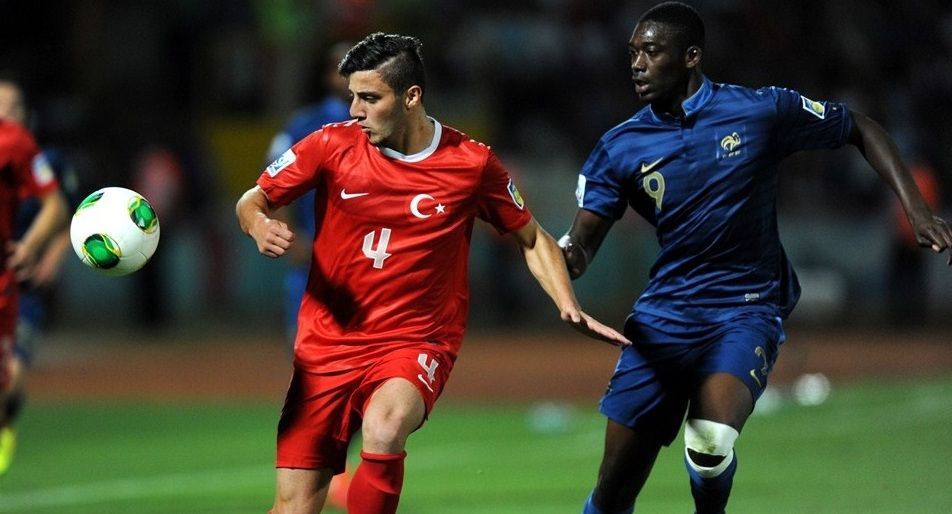 Scare for Spain as hosts bow out

THE DAY REPLAYED: Comebacks, red cards, late goals, raucous atmospheres and penalties aplenty: the first batch of last-16 fixtures at Turkey 2013 had all this and a great deal more.
Amid the drama, two intriguing quarter-final pairings emerged, with France cruising past the hosts to set up a meeting with one of the tournament’s surprise packages, Uzbekistan, who saw off Greece. Favourites Spain, meanwhile, were given a real fright by Mexico before Jese rode to the rescue, and the European champions will now put their unblemished record on the line against Nigeria’s conquerors, Uruguay.

Memorable Moments
Leading by example
Antonio Briseno arrived at Turkey 2013 as Mexico’s captain but has spent the last two matches on the bench, having been dropped by coach Sergio Almaguer after El Tri’s opening two defeats. Yet while other players would doubtless have sulked in such circumstances, the defender proved himself to be a true leader. Swallowing his disappointment, Briseno resisted the temptation to sit moping on the bench, instead positioning himself on the side of the pitch, applauding and roaring encouragement to his team-mates – including the man who taken his place. And while Mexico ultimately suffered the cruellest of defeats, the passion they displayed throughout the match was personified in a player who did not even take the field.

Devotion rewarded
At every one of Uzbekistan’s matches here in Turkey, the same exuberant band of drum-beating followers have brought joy and colour to their side’s matches – win, lose or draw. Over the past six days, those supporters’ determination to back their team has required remarkable dedication, with well over 1000 miles covered in travelling between Bursa, Antalya and, this evening, Gaziantep. Such sacrifices aren’t always rewarded in football, but Uzbekistan's players ensured that their supporters returned to their hotels deliriously happy – and looking forward to another trip, this time to Rize, in the quarter-finals.

Jese emulates legends
Scoring a last-minute winner would have been reason enough for Jese to feel justifiably proud of himself this evening. However, the victory over Mexico was the fourth successive match in which the Spain striker has found the net at Turkey 2013, which not only nudged him alongside Bruma at the top of the tournament's scoring chart, but enabled him to emulate some of the game’s all-time greats. Only eight other players, after all, have scored in four consecutive FIFA U-20 World Cup matches, and among that group are names as familiar as Juan Roman Riquelme, Adriano, Lionel Messi and Diego Maradona. None of these legendary figures, however, made it to five-in-a-row; only the Hungarian Vladimir Koman can currently boast that. And it is Koman that Jese will be aiming for when Spain take on Uruguay in the last eight.

Eagles honour one of their own
A sombre shadow was cast over Nigeria’s meeting with Uruguay with the news that Thompson Oliha, a Super Eagles legend who graced the FIFA U-20 World Cup in 1987, had died at the age of 44. Black armbands were sported by the Flying Eagles players in a mark of this respect for this highly respected predecessor, who went on to win the CAF Africa Cup of Nations and represent his country at the FIFA World Cup in 1994. And while Nigeria could not honour Oliha with a win, the spirit with which they approached their task when down to ten men - not to mention the backing of their fans - represented a fitting tribute.

Gaziantep sets the standard
After some disappointing attendances during the group phase, tonight we saw the real Turkey in Gaziantep. All the ingredients were there – the noise, the chants and the passion – in a packed and rocking Kamil Ocak Stadium. Even as the French goals began racking up, the fans maintained – and, if possible, increased – the decibel level, providing a stirring reminder of the kind of atmospheres for which Turkish football is famous. They couldn’t quite manage to roar their team to victory, but those fans in Gaziantep set a new standard for the tournament and did their country very proud indeed.

The Stat of the Day
3 - No fewer than three penalties were converted in Uzbekistan’s 3-1 win over Greece. Only twice before in the history of the FIFA U-20 World Cup have there been so many successful spot kicks in a single match: Argentina’s 2-1 win over Egypt in 2011 and a 2-2 draw between Japan and Czech Republic, which the Europeans won, fittingly, on penalties. Incidentally, all three matches took place in the Round of 16.

The Words
So happy because of this match, which was really dificult. Now we go on to the quarter-finals. C'mon team!!!
Jese, Spain striker