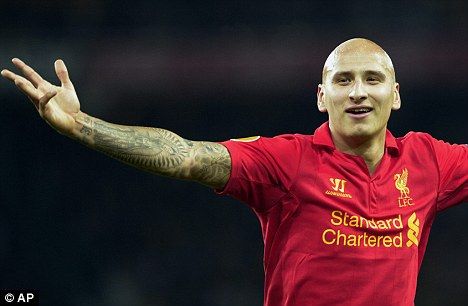 Swansea City have agreed a £6m fee with Liverpool for the England midfielder Jonjo Shelvey and will discuss personal terms with the player in anticipation of concluding a deal before the weekend.
The 21-year-old, a £1.7m signing from Charlton three years ago, has been limited to a peripheral role at Anfield and had been told by Brendan Rodgers that his situation may not improve and that he can leave in search of regular first-team football.


Liverpool fielded interest from newly-promoted Crystal Palace, together with West Ham and Norwich, but Swansea's bid was deemed acceptable.

Shelvey, who made his senior England debut in November's defeat in Sweden, only made 17 Premier League starts over his time at Anfield but is expected to seize the chance to move to the Welsh club, with the added incentive of Europa League football, to kickstart his top-flight career.

The 17-year-old goalkeeper Gregor Zabret and 19-year-old midfielder Alex Gogic also joined on Tuesday from the Slovenian side NK Domzale and the Greek club Olympiakos respectively.