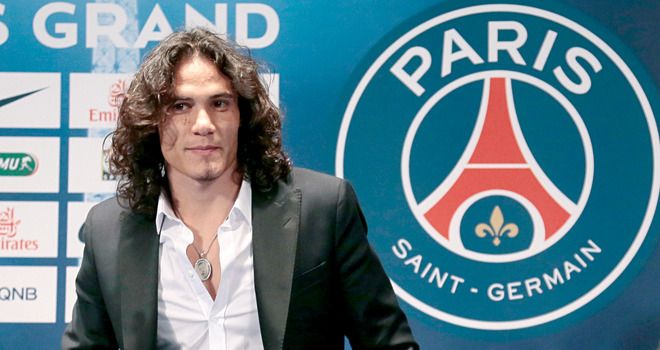 Paris Saint-Germain have announced the signing of Edinson Cavani from Napoli on a five-year contract.
The 26-year-old striker has been one of the most sought-after players during this transfer window, with Chelsea and Manchester City among those linked with the Uruguay international after he fired 38 goals in 43 appearances last season.

However, he has opted to join the French champions, with the fee reported to be in the region of £55m.

"The transfer of Edinson Cavani is further proof of the club's ability to attract the best players in the world," said PSG president Nasser Al-Khelaifi.

"The player was seduced by the club's sporting project and is delighted to be joining an ambitious side, impatient to take on new challenges.

"We are especially happy to present such a hugely coveted player of immense talent to our supporters."

Cavani began his career with Montevideo in his native Uruguay and made his professional debut during the 2005-06 season, scoring five goals in 15 appearances and winning the league title in the following campaign.

He moved to Palermo in 2007, forging a potent partnership with Fabrizio Miccoli, but Cavani made his biggest impact when he joined Napoli in 2010.

In his first season, Cavani scored a club record 26 league goals and he lifted the Coppa Italia the following year, as well Uruguay's first Copa America crown in 16 years.

By announcing their first signing of the summer, PSG have restored a bit of order at the club following Carlo Ancelotti's departure for Real Madrid and Brazilian sporting director Leonardo's resignation.