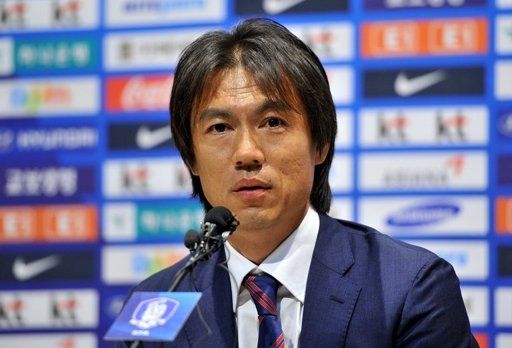 New South Korean coach Hong Myung-Bo promised Tuesday a new "Korean style" of high-energy, pressure football that would give the out-of-form national team an edge at the next year's World Cup in Brazil.

"We aren't Spain or Germany," the former South Korean captain told his first press conference a day after his appointment.

"I'd like to develop Korean-style tactics," he said, stressing a high work-rate strategy that closed down the opposition while maintaining a tight defence.

"This will enhance our competitive edge," he added.

Hong was given a two-year contract to replace Choi Kang-Hee who quit as manager last week after South Korea scraped through to qualify for its eighth straight World Cup.

The team will need any edge it can find in Brazil after a series of lacklustre qualifying performances that left it relying on goal difference to book a berth in the finals.

In its last four qualifying games, South Korea was beaten twice by Iran, drew with Lebanon and was lucky to scrape through with wins over Qatar and Uzbekistan.

Hong played on the national team at four consecutive World Cup finals from 1990 and became a national hero as captain of the side that reached the semi-finals of the 2002 competition in South Korea.

He began his coaching career as an assistant on the senior national team from 2005 to 2007.

He coached South Korea to bronze at the 2010 Guangzhou Asian Games and led an under-23 team to a bronze medal at the London Olympics last year. It was the country's first Olympic football medal.