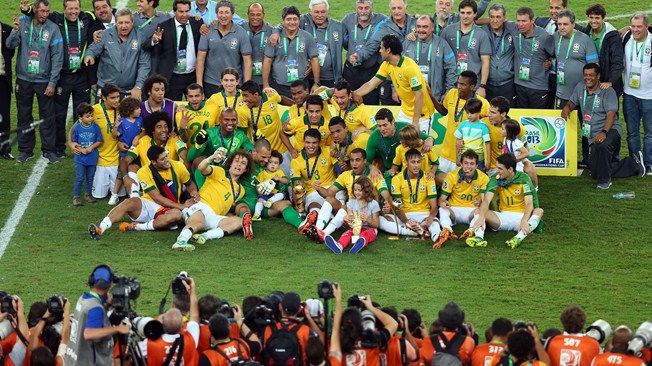 Spain’s all-time greatest challengers were expected to add the FIFA Confederations Cup trophy to their enviable collection at the Maracana.

Brazil didn’t just rip up the script, they did so with a performance that would have made proud the 1958 campeões of Garrincha and Pele, ‘The Beautiful Team’ of 1970 and the Zico-headlined thrill machine of ’82.

It took just two minutes for Fred to make the Maracana decibel levels comparable to a NASA base on space-shuttle launch with a predator's goal. Midway through the half David Luiz somehow rocketed his big, burly frame back to make what was, surely, one of the greatest clearances in history (Pedro, whose shot he denied, even jogged up to the Chelsea centre-back at half-time to shower him in praise!). Neymar made it 2-0 on the stroke of the break, his vicious strike into the roof of the net, with his weaker left foot, further vindicating why Barcelona recently paid €57m for him. Fred competed a 3-0 victory two minutes after the restart, though that wasn’t the end of the misery for Spain, for whom Sergio Ramos missed a penalty and Gerard Pique was sent off for bringing down Neymar as he raced through on goal.

Earlier, in the battle for bronze, an Edinson Cavani brace – including a handsome free-kick – proved in vain as Italy beat Uruguay on penalties following a pulsating 2-2 draw. The principal headline-maker was Gianluigi Buffon. On a day in which he played his 133rd international, moving just three behind Azzurri record-holder Fabio Cannavaro, the 35-year-old goalkeeper made three saves in the shootout.

Brazil and Uruguay weren’t the only winners on the night. So, too, was everybody heading to the South American country for next year’s FIFA World Cup. For, once again, the futebol-impassioned Brazilians fans made for extraordinary atmospheres to which words simply won’t do justice. So, if you haven’t already, start making plans to be part of the greatest event in sporting history next year.