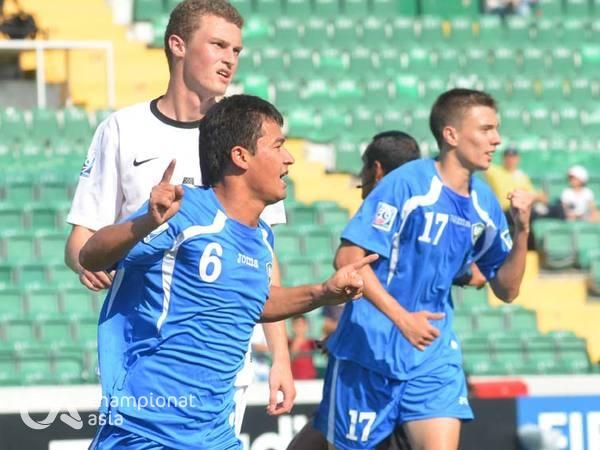 Today’s Uzbekistan U-20 has 6 players from Uzbekistan’s Mexico 2011 U-17 World Cup squad, for whom the match was principal, as they had been trashed by the same opponents 1:4 in the opening match of that tournament.
Junior White Wolfs started the game quite dynamically and scored in early minutes. Max Crocombe, the goalkeeper of junior All Whites unexpectedly made a mistake while clearing the ball and passed the ball to Igor Sergeev. And it didn’t take Igor long to shot a strike which Crocombe managed to safe, but it was man of the match Abbosbek Makhstaliev who tapped the deflected ball.
Uzbeks dominated the rest of the first half and had number of goal scoring opportunities. However the first half ended with 1:0.
The top goalscorer of the AFC U-19 Asian Championship Igor Sergeev, whose first goal was denied by the referee due to the handball didn’t miss his next chance. After opening in the penalty area and receiving the perfect through ball by Makhstaliev his shot found the goalpost before reaching the back of the net.
Having a strong support by Uzbek funs at the stadium, Uzbekistan kept attacking efforts and were rewarded in 67th minute by the goal of Diyorjon Turopov. His distance shot turned into the volley and found the back of the net after deflection.