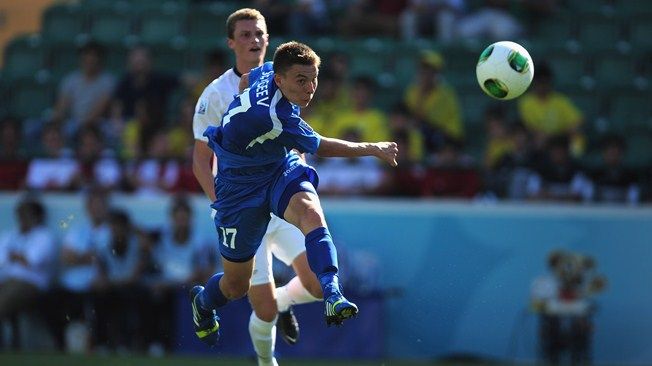 Here are two universal truths: there's a first time for everything, and in football, practically every country eventually comes up with a golden generation.

Both factors have come together for Uzbekistan at the FIFA U-20 World Cup 2013, making coach Akhmadjan Musaev's charges one of the most intriguing teams to watch in Turkey.

The men from the double landlocked nation of almost 30 million in Central Asia have reached the quarter-finals at this series of tournaments for the first time in their history. Six of the current squad made the last eight at the FIFA U-17 World Cup 2011 in Mexico, so the evidence suggests the group of players born in or around 1994 boast real potential and the possibility of greatness.

“Our generation could go a long way," agreed striker Igor Sergeev when he spoke to FIFA.com. “We're looking to make a mark here at the World Cup finals, and we're also keeping one eye on our preparations for the next Olympic Games. We're picking up valuable experience for the years to come."

The potent finisher, who is 20 and stands 1.85m tall, exudes confidence and determination on the back of his two goals so far for one the surprise packages at the tournament. What is more, Sergeev was not in the team for the U-17 contest two years ago, nor is he a member of the widely admired 1994 year group.

The starlet from Pakhtakor Tashkent is a year older than most of his team-mates, automatically taking a place near the top of the dressing room hierarchy. He showed nerves of steel after 62 minutes of the Round of 16 clash against Greece: with the game delicately poised at 1-1, Sergeev confidently stepped up to convert a penalty and set his side on the road to the quarter-finals.

In a team mainly populated by smaller, quick and nimble players, Sergeev stands out for his burly stature and robust physique, his ability to hold up play with his back to goal, and his precise layoffs. He also tirelessly looks to get on the end of the crosses generated by the Uzbeks’ exciting wide men. The No17 is the proverbial final piece in the jigsaw, creating a promising whole from the sum of the parts.

But what is the secret of the team's current success? “We've been playing together since we were all very young. We know everything about each other, and each man is aware of what the others will do. We'd understand each other blindfolded out on the field," Sergeev commented, before adding with a smile: “And most of us are extremely agile, which is one of our really big strengths. Of course, you still need a big man up front, and I guess that would be me."

Sergeev comes across as one of the more ebullient members of the team and a wisecrack or witty quip is never far from his lips, but in all seriousness, he believes a relaxed approach is another reason why Uzbekistan are currently one of the eight best U-20 teams in the world.

“We have a lot of laughs together. We're always pulling practical jokes. But I think one of our hallmarks is that we know when to be light-hearted, and when to be serious and focused. We're very advanced as a team in this respect, but that's what it's all about in football. The right combination of fun and seriousness is vital. We can switch between the two at any time."

Following the victory over Greece, it was a time for fun and an outpouring of emotion, as Sergeev and company recognised a significant moment for their team. Pride entered the player's voice, but not without a tiny trace of disbelief, as he contemplated the achievement to date: “It's a massive festival for everyone in Uzbekistan. We’ve made history, and we'll probably only really grasp what we've achieved a couple of days from now."

The striker hurried to pass on credit for the team's performance: “We won it for all of our fantastic fans, who've been following us everywhere here in Turkey, and who’ve travelled huge distances. Their support is wonderful."

The next win-or-bust encounter is on Saturday in Rize against the increasingly poised French, although Paul Pogba and his team-mates will need to dig deep if they are to resist the superbly oiled Uzbek unit, cheered and drummed on by an enthusiastic group of supporters, as they continue to weave a Central Asian footballing fairytale. Uzbekistan's golden generation will be utterly focused on staying in the race for the trophy, and that is no laughing matter at all.