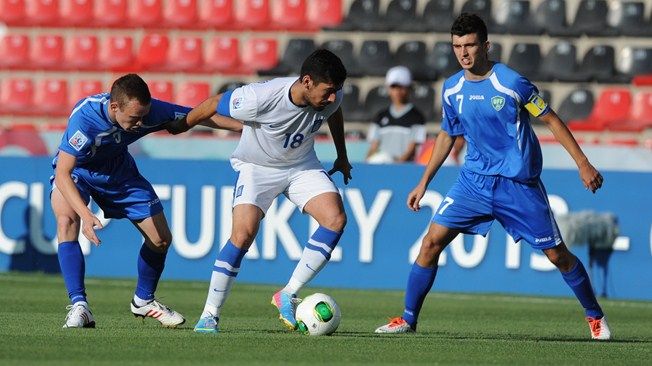 Uzbekistan are through to the quarter-finals of the FIFA U-20 World Cup after a dramatic 3-1 victory over Greece that included two red cards and three penalties.
An evenly matched contest, this match turned just after the hour mark when Dimitrios Kourmpelis conceded the second of the game’s spot kicks and was sent off, giving the central Asians a crucial advantage.

There was little to suggest that a game of such incident was to unfold during some rather tame early exchanges, although the game burst into life on 27 minutes when Uzbekistan scored an excellent opener. Captain Vladimir Kozak made good ground on the left and delivered a fine diagonal cross which Abbosbek Makhstaliev met first time, smashing a right-foot volley in off the inside of the post from 14 yards.

Greece, though, fought back and after Ioannis Gianniotas had gone close from a free-kick, curled inches over from the edge of the box, they claimed a deserved equaliser. Rash challenges from the Uzbek defenders on both Dimitrios Diamantakos and Ioannis Gianniotas resulted in a clear penalty, and captain Konstantinos Stafylidis assumed responsibility, slotting his penalty out of the keeper’s reach, high to his left.

Greece were arguably enjoying the better of things at this stage but the match swung in Uzbekistan’s favour in the 62nd minute when Dimitrios Kourpelis was penalised for grappling at a free-kick and was sent off for a second bookable offence. Igor Sergeev slotted away the resultant kick, sending the keeper the wrong way with a firm and precise left-foot shot.

There was no arguing with the award, and Greece were again their own worst enemies when a clumsy challenge from Dimitrios Konstantinidis on substitute Zabikhillo Urinboev yielded the game’s third penalty. This time, Sergeev stood aside for Sardor Rakhmanov to have a go, and he waited for the keeper to commit before passing the ball into the top right-hand corner.

The drama wasn’t over quite yet though, with Uzbekistan Boburbek Yuldashov also picking up a second yellow card with four minutes remaining. However, this restoring of numerical parity came too late for Greece and it is the Uzbeks who advance to a last-eight duel with either France or hosts Turkey.