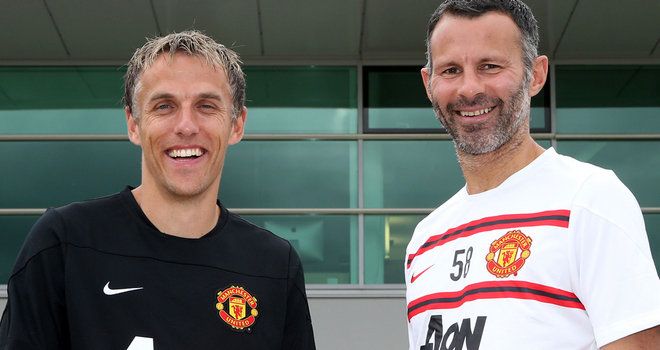 Manchester United have announced that veteran winger Ryan Giggs is to become a player-coach with immediate effect.

And former United defender Phil Neville is also going to take a coaching position at the club, as new manager David Moyes re-shapes the coaching staff.

The 39-year-old Giggs is a legend at Old Trafford, having made well over 900 appearances for the club since his debut in 1991.

The 13-time Premier League winner signed a one-year extension to his playing contract in March and will now become a part of the coaching team as well.

Often mentioned as a possible future United manager, Giggs has been taking his coaching badges and is due to attain the UEFA Pro Licence next summer.

"It's a great privilege to be appointed a player-coach," he said. "I hope I will be able to bring my experience to bear, having been both a player and part of the Manchester United family for so long.

"I see this as the first step in my future career. I'm really looking forward to working alongside David and the team."
Ryan Giggs

"It's no secret that I have been taking my qualifications and I see this as the first step in my future career. I'm really looking forward to working alongside David and the team."