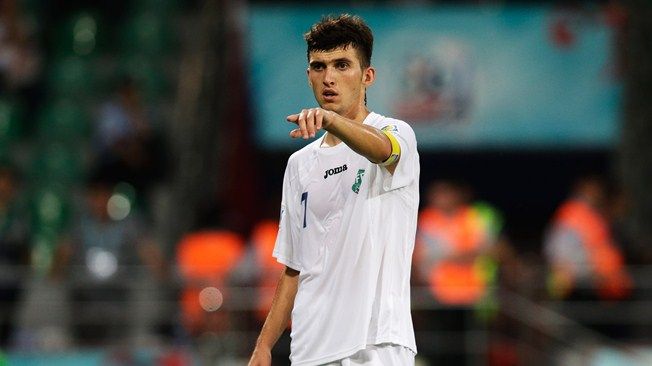 A little after 20.00 in Rize, the walls of the Yeni Sehir Stadium suddenly shook to a raucous combination of wild applause and cries of joy.
France had just beaten Uzbekistan 4-0 in the FIFA U-20 World Cup Turkey 2013 quarter-finals, but these sounds of rejoicing were not coming from the French dressing room. Instead, it was the flag of Uzbekistan pinned to the door behind which the celebrations raged.

It cannot be often that a side finds something to cheer in the wake of a tournament exit, particularly when they have lost by four clear goals. In Uzbekistan's case, however, the explanation was simple. "It was a historic achievement for us just to reach the quarter-finals," the team's captain Vladimir Kozak told FIFA.com. "Despite the defeat, we were happy with our performance. After the match, the coach came over to us, not to congratulate us but to thank us for having made it possible for him to experience such joy. That was a big surprise and it really touched us, and we all applauded him."

If the feelings of happiness were profound for Akhmadjan Musaev, the coach in question, they were no less intense for Kozak, who almost missed the trip altogether. "I was injured for a long time before the tournament," said the Pakhtakor Tashkent midfielder. "In the end, I recovered around five days before it started, and I did my best to be useful to my team. I thank all my team-mates for having put their trust in me and helping me feel so good so quickly."

He certainly seemed to hit the ground running, playing a full role as the central Asian side saw off New Zealand 3-0 in their opening game. "If I could only take one memory away from this tournament and keep it for a long time, it would be that win," said Kozak. "That was the most important moment, the one which allowed us to see we were up to the required standard in this competition. After that game, we realised what we were capable of, and then we played even better against Croatia and qualified for the next round."

There can be little doubt that Turkey 2013 began as a slightly daunting proposition for Kozak and Co, Uzbekistan having picked up just a single point in six games at previous FIFA U-20 World Cups in 2003 and 2009. "We wanted to show that we deserved our place in this competition," added the No7. "We dreamt of getting out of the group stage and we gave everything we had to do it. It's a tournament that brings together the best teams in the world, and we'll always be able to say that Uzbekistan were one of them."

Musaev's charges can even pride themselves on having been among the top eight sides on Turkish soil, and who knows how far they might have gone in different circumstances. "We played without three key players, and that was a real handicap," explained Kozak, a holding player by trade but repositioned in central defence against Les Bleuets due to suspensions for both Sardor Rakhmanov and Boburbek Yuldashov. Talented midfielder Jamshid Iskanderov missed the tie with an injury, meanwhile. "France were the superior team, but the result might not have been the same if we'd had our strongest line-up."

Uzbekistan's bid may be over, but Kozak feels his team can look back on their participation with pride. "When we arrived in Turkey, lots of people had never even heard of Uzbekistan," he said. "Thanks to our performances, we've helped put our country on the map. I hope that will always be the case from now on in future tournaments."

The U-20 side's efforts follow on from Uzbekistan's excellent displays at the FIFA U-17 World Cup Mexico 2011, which also ended at the quarter-final stage. That breakthrough campaign made an entire nation proud, to the extent that the Uzbek government combined with the Uzbekistan Football Federation (UFF) to reward each and every player with a new car.

Having matched that performance, Kozak and his team-mates learned after their meeting with France that they too can look forward to a gift when they return – another reason for the joyous sounds emanating from the Uzbek dressing room. What form it will take remains a mystery, however. "We couldn't stop thinking about it and discussing it in the dressing room," said Kozak with a broad grin. "We're very excited and we can't wait to find out what it will be."

With that impatience mixing with fresh memories of a fine tournament, Uzbekistan ought to have plenty to keep them occupied on their journey home.