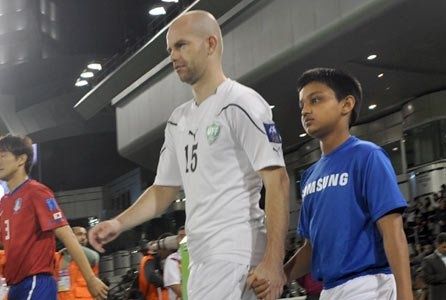 It is always pleasant to me to talk to Geynrikh. Every journalist has his favourite footballer he enjoys talking to and exchanging ideas. One never gets bored talking to such players as Odil Akhmedov, Kamoliddin Tojiev, Aleksandr Geynrikh and Ilkhom Suyunov.

As we know each other well our conversation always runs sincerely and full of unbiased questions. Although in recent years he has not been as successful with the National Team as he used to be in the past, Geynrikh is considered one of the best players in Kazakhstan league now, and he has the trust of Uzbekistan fans. This time he spoke about his Kazakhstan team. Geynrikh is known for giving extraordinary interviews such as Mourinho’s. This time was not an exception:

-   Hi Aleksandr, the fans have missed you, long time no see?
– Well, I don’t see myself either (joking)!


– Watch your passport picture then!
– I have a mirror for that (he continued joking, after realizing that I was joking).


– How are you doing there in “Aktobe”? Did you get settled?
– Yes, things are great here. I can say awesome.


– Now your team is on top of the table. Based on the played rounds do you think you can be champions?
– Every strong team’s goal is to be champions. Therefore, playing for such an ambitious club as Actobe we cannot aim other goals than the first place. Our main goal is the national championship.


– Last year champions Shakhtyor, what are their lacks? Or did Aktobe progressed instead?
– I don’t know what is wrong with Shakhtyor. I rather focus on my team. If we wrap up most available points at the first stage of the championship it will be easier in the play off stage for us. Therefore all our players are doing everything on the pitch for the win.


-   How effective are the legionnaires being in Kazakhstan league? Except for few Uzbekistan international players others look useless…
– They are being very useful. By regulations, players invited here should be under 30, and have a place in their national team. The requirements for legionnaires are quite tough. This contributes to the grows of the championship level.


– Local coach Nikitenko was assigned a head coach of Actobe at the start of the season. But you guys were invited by the previous coach Muhanov. How is Nikitenko treating you?
– Our relationship with the head coach is good. The new coach pays more attention to the defensive line and this positively reflected on our results and the table spots.


– Is it why the team conceding less goals now?
– Well, that is one of the reasons, but also signing Armenian national team player Robert Arzumaniyan and Moldavian halfback  Sergey Kovalchuk is the second reason. These two players are being very effective in the defensive line of our team.


– Your team has played three consecutive draws by now. What is surprising is that among them there are games against outsiders Akjayik and Jetisu. So the question is, how different are the leaders and minnows in Kazakhstan?
– There are minor differences. Any drop zone team can defeat the favorites. The levels of the teams here are quite close to each other.


– Premier league heads treat the clubs very strictly. There are only 12 teams in the top league for several years now. Sometimes the points are being suspended. Do you agree that we need to use the same strict rules in our PFL?
– I don’t think so. I am for the increasing the number of the strong teams. Only then we can attract strong legionnaires. Today’s 3+1 is not enough in my mind.