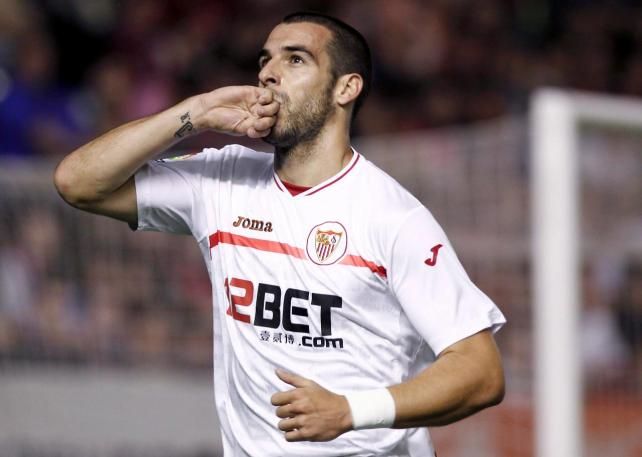 Atletico Madrid have all but given up on signing Sevilla striker Alvaro Negredo as they "can't compete" with the financial clout of Manchester City.

Manuel Pellegrini is believed to have set his sights on signing the 27-year-old, with reports in Spain suggesting a €25m deal had been agreed between the two clubs.

And now Atleti have added fuel to the speculation linking Negredo with a move to the Etihad Stadium after admitting they could not compete with the Premier League club's financial might in the battle to sign the Spain international.

"We can't compete with the petrodollars," an Atletico spokesman told Orgull de Nervion. "We're speaking but we won't be able to reach the amount Manchester City can offer".

Negredo himself, however, has admitted that he has not yet heard anything about a transfer to the Premier League ahead of pre-season.

"I'm taking advantage of the last few days of holiday I have left," he said. "The truth is that they haven't told me anything concrete. All I know is that I have to be at Sevilla on Saturday."

Atletico had hoped to sign Negredo as a replacement for Radamel Falcao, who joined Monaco at the end of May, and manager Diego Simeone is afraid the club will lose ground if they cannot adequately replace the Colombian.

"Real Madrid have already got Isco for €30 million [£25m] and Barcelona have bought Neymar, while we have nobody. Nobody has arrived and that is difficult for me. We are looking at alternatives to become more competitive," he told Fox Sports.

"If we do not improve the squad all that we have achieved until now will be difficult to surpass. We still have not replaced Falcao and I hope that is resolved in the coming hours."

City's apparent pursuit of the Spain striker may have cast doubt on Atleti's chances but Sevilla chairman Jose Maria del Nido might have ended their chances entirely by claiming that there is no chance that he will join the Copa del Rey winners.

"I see Atletico’s chances of getting Negredo as very difficult," he told reporters. "In fact, as of today [Wednesday], they have a zero per cent chance. We have had no contact with them for the last 10 days.
"There have already been major offers from various other teams that I have rejected."